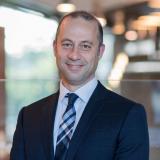 Prior to joining Bluewater Health, he was practicing as a Cardiac Surgeon and Interim Director of the Cardiovascular Intensive Care Unit at Thomas Jefferson University Hospital in Philadelphia.

Dr. Haddad is a member of multiple medical societies including the Society of Critical Care Medicine (SCCM), Canadian Cardiovascular Society (CCS) and Society of Thoracic Surgeons (STS). He’s on Faculty at Western University’s Schulich School of Medicine and serves as the Regional Academic Lead for the Lambton medicine academy. Dr. Haddad also has a long track record in research including multiple peer-reviewed scientific publications and book chapters in the fields of Cardiothoracic Surgery, Transplantation and Critical Care.

Dr. Haddad divides his time between medical practice and administrative duties and works collaboratively and closely with the Executive Team and Board of Directors to support the hospital’s strategic mission of high quality, safe, and compassionate patient care.

Due to COVID-19, Bluewater Health currently has restrictions in place limiting family support and visiting in the hospital – but that doesn't mean you can't connect with your loved ones. Please let us know if you would like to schedule a 15-minute virtual visit with a loved one in hospital.