We take great pride in our legacy of patient care, quality and service, and it is upon these strong foundations that we fulfill our purpose statement: Health through partnership, Caring with kindness.

The book tells the compelling story of the inception of each hospital and the people who have served in them since the late 1800s. It is this element of healthcare workers’ unyielding commitment to care that is consistent throughout the history of Bluewater Health.

The book was made possible by generous sponsorship from Hogan Pharmacy. The book is available for $10.00 in the Bluewater Health Foundation office, and in the gift shops in the hospitals in Sarnia (Poppies) and Petrolia (Charlotte’s Boutique). 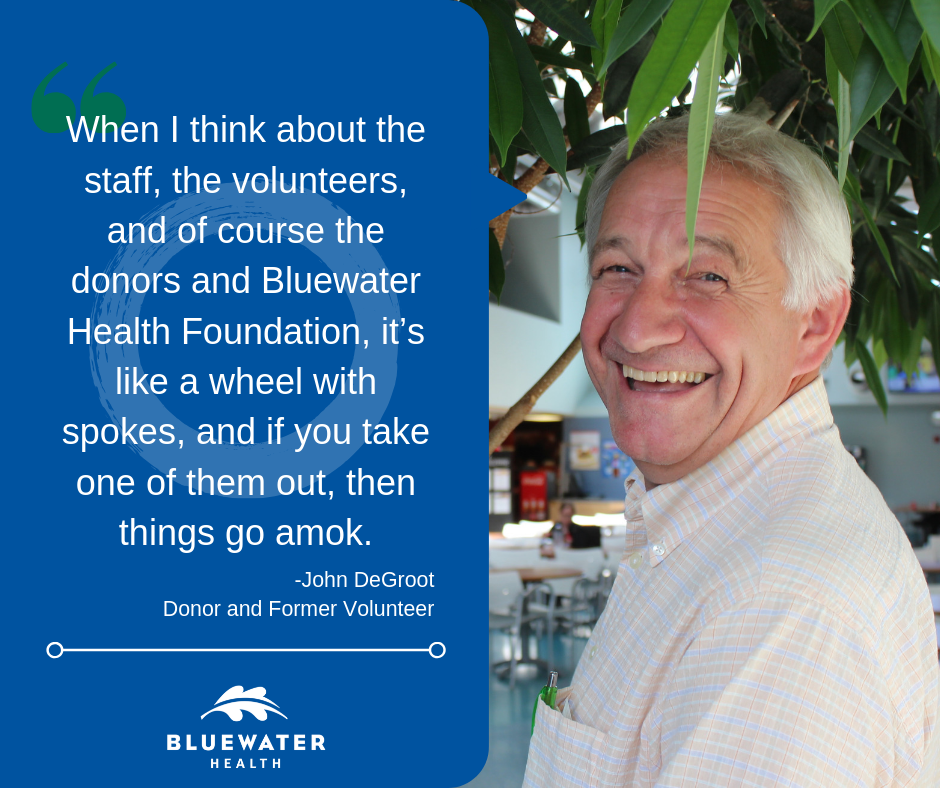 Serving as chair of Sarnia General Hospital’s board from 2001–2002, John was a key player in making decisions about how Sarnia’s hospitals would best serve the community.

“Very quickly after I became chair, we began the process of chatting with the Ministry of Health to see how best we can meet the hospital needs in Lambton County,” John says. “The collective wisdom indicated we better start doing some realignment.”

John enjoyed the freedom the Ministry gave to the board to make its own agenda and roadmap for building the solution: Bluewater Health. “There was a lot of trust built between the three hospitals, and the result was a friendlier, state-of-the-art product, so I think it was a much smoother process,” John says.

Although he notes there were some bumps along the way, John says the community now has a more efficient and lean hospital filled with hardworking individuals.

“The hospital system is certainly serving Lambton-County and beyond like we always have, it just happens to be under one system as opposed to three,” he says.

As a dedicated donor, board member and volunteer for Sarnia General Hospital, Bluewater Health and its Foundation, John has had the opportunity to truly get to know the community.

When asked to describe the Bluewater Health community with one word, John quickly responds with “awesome.”

“When I think about the staff, the volunteers, and of course the donors and the foundations, it’s like a wheel with spokes, and if you take one of them out, then things go amok,” he explains.

John’s involvement with the hospitals started when he was a teenager. As part of DeGroot’s Nurseries, he contributed with his father and brother to Sarnia General Hospital’s “Growing Expectations” campaign. John remembers it as his first act of support toward the hospital, one that led to many more contributions.

Volunteering has always been a significant part of his life, and he says being involved in the hospital’s change is one of his fondest memories.

“I think it’s probably in people’s DNA to volunteer and stay connected,” he says. “Some people are into that and others are not, but that’s fine. I don’t golf, I don’t fish—I choose to spend my time volunteering.”

John says he has always had a consensus-building role within the hospital, as he’s always enjoyed making connections and fostering relationships. When John visits Bluewater Health, he feels connected to the community he helped build.

“All I need to do is walk in the front doors and wave to a few people and I’m connected,” he says. “It’s not just bricks-and-mortar­­­—it’s a community hub.”

Although John has many experiences with the hospital to reflect on, he chooses to look forward to what’s to come. For him, that includes continuing to support Bluewater Health because that’s where he believes his purpose lies.

“We’re placed upon this earth in order to better people and do whatever we can to enhance the lives of others,” he says. 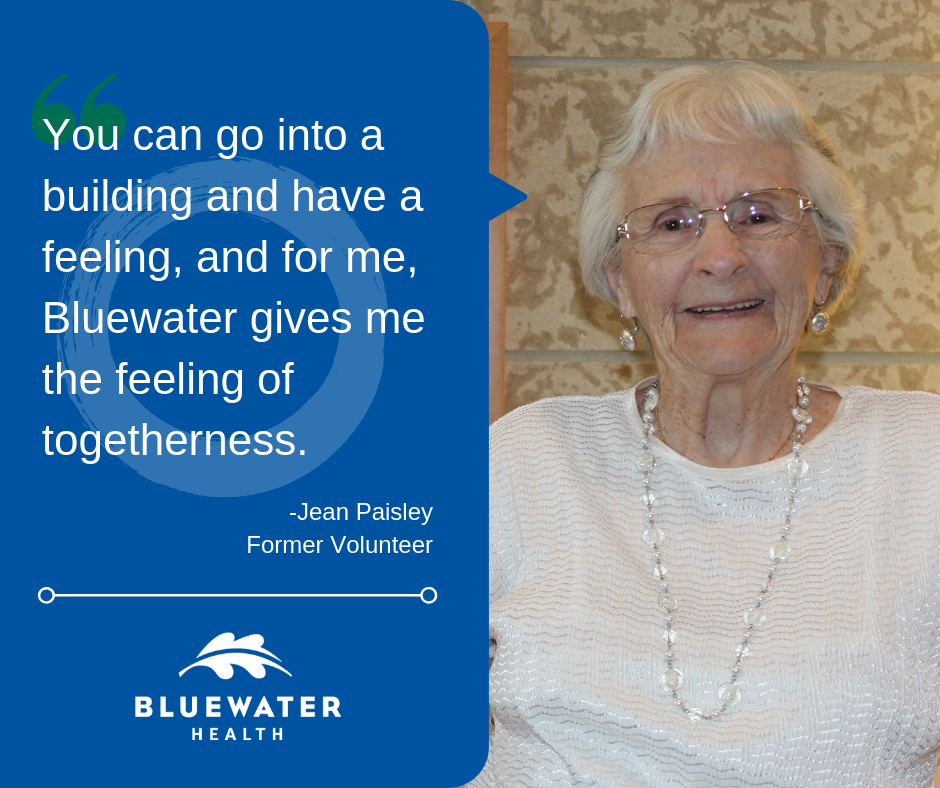 Ninety-six-year-old Jean Paisley is the living embodiment of dedication.

Since 1944, Jean has been an integral part of Bluewater Health’s history. She graduated from the Sarnia General Hospital School of Nursing, and worked as a nurse in various departments for decades. She’s still proud to call herself a nurse.

But her involvement didn’t end with nursing. She volunteered with Bluewater Health and its predecessors for 62 years, embracing the hospitals’ changes and her many moments with patients along the way.

“I loved what I was doing, I always did,” she recalls.

With a natural inclination for paediatrics, Jean first started her volunteering journey with the Children’s Auxiliary at Sarnia General Hospital. She was honoured to be given a lifetime membership to that auxiliary.

When she retired, she thought she’d pursue something different from nursing; however, she was guided back to her life’s calling.

“It came out so loud and clear what I was to do,” she says. “I saw a poster that said ‘bloom where you are planted.’ It meant I should do what I was trained to do.”

At Sarnia General Hospital, Jean joined as a volunteer the Palliative Care team, which was later changed to Supportive Care. When Sarnia General and St. Joseph’s hospitals amalgamated in 2003 to form Bluewater Health, Miranda Lau, Manager of Spiritual Care at the time, encouraged Jean to continue volunteering.

“Miranda phoned me and said, ‘Come over and I’ll give you a tour,’ and that was that. I just retired this year,” she says with a grin.

Jean remembers her first impression of Bluewater Health being how huge and bright it is, and she noticed the detail in its design. “I appreciated the many nautical prints on the hallway walls that tie the hospital into our surrounding beautiful lake and river,” she says.

At Bluewater Health, Jean volunteered every Monday on the fourth floor in both medicine and telemetry. “There was lots of walking, but I just loved what I did,” she says. Her contagious smile and gentle demeanour have had a positive impact on Sarnia hospitals throughout the years.

Times have changed since Jean first started her journey with the hospitals. Working at Sarnia General Hospital as an Operating Room nurse during the war, Jean spent her Sundays patching up the surgeons’ rubber gloves.

“Sometimes the surgeons would be wearing more patches than gloves because of the shortage of rubber in those years,” she says.

Those types of memories are why Jean says that there is absolutely no comparison between the hospital then and now.

She notes that Bluewater Health makes a great effort to recognize its staff and volunteers, making the people who walk through the doors feel more like a family. “You can go into a building and have a feeling, and for me, Bluewater Health gives me the feeling of togetherness,” she says.

But no matter what Jean was doing or where in the hospital she was, her number one priority has always been the patients. She’s helped a countless number of people over the years, but says patients have helped her as well.

“I was fortunate that I got so much back from the patients,” she says. “I don’t think there would be a day I didn’t learn something new, and I learned so much from the patients who were brave and courageous. It was just amazing.”

If you or a loved one needs support with mental health or addictions.